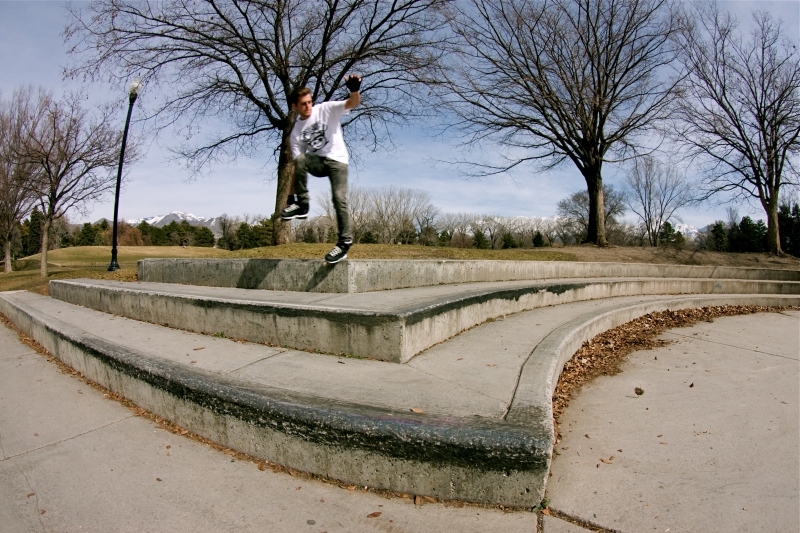 I believe every town/city has them; spots that once were home to regular sessions but have since been forgotten. Although I have only lived in SLC for a couple of years, I am still able to notice spots such as those. What once was a perfectly squared ledge has since been over skated by skateboarders and the squared edge slowly eroded to become a chucked and rounded curb on which only h-block tricks are possible.

While living in SLC and using my bike for my main source of transportation during the warmer months, I have consistently passed through Liberty Park on several Sunday afternoons and scene the plaza ledges just outside of the East entrance of the Aviary. Every time I have passed them I have thought how it would be great to bring that spot back to life. This past friday I took a half day at work, and while my car was in the shop I threw my mason stone in my pack and headed over to Liberty Park to make some improvements. After about 30 minutes of rubbing and sweaty the Liberty Park plaza ledges were brought back to life. Not only is this spot a no bust, but it also is lit and a great place for the many passer-byers (many of which are rec bladers) to see rollerblading up close. It’s spots like these that will slowing bring rollerblading to the public eye in a positive way.

Check out some quick hits below:

This entry was posted in Uncategorized and tagged Kaycee Landsaw, roller. Bookmark the permalink.